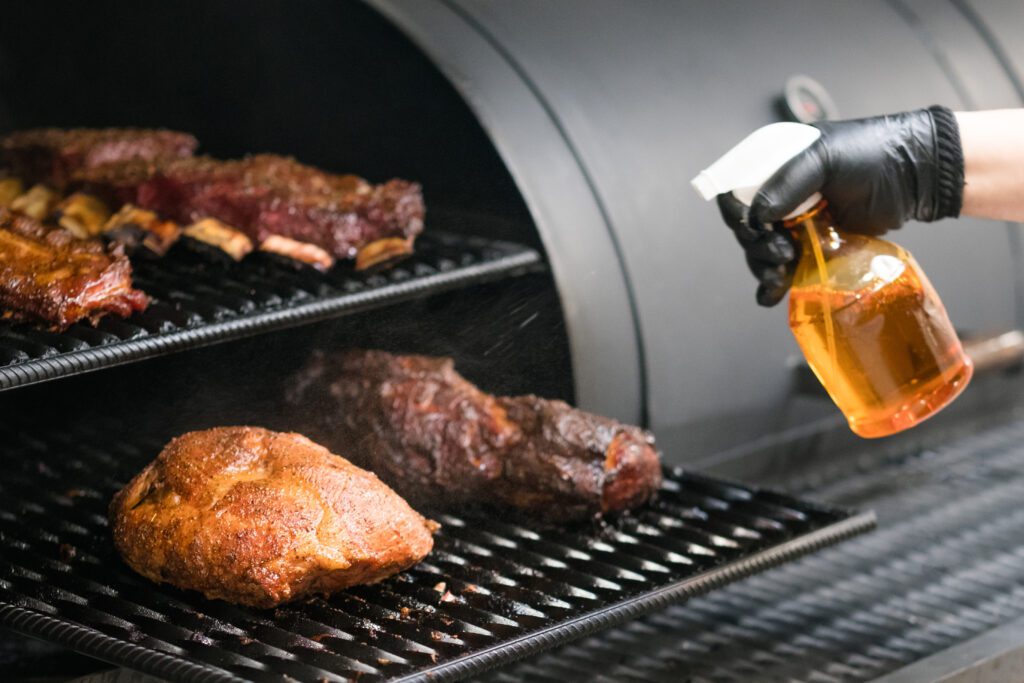 Do I need to spritz my brisket while smoking?

Although smoking a brisket takes a lot of time and effort, the excellent meat it produces makes it worthwhile. Each pitmaster uses a different brisket smoking recipe and technique. As some grillers insist that spritzing a brisket while it smokes is vital, others disagree. We’ll discover why some people spritz their briskets and if it’s essential to use this technique.

Spritzing is a cooking method that gives your smoked meat more taste and moisture. Additionally, using this technique prevents burning or overcooking the brisket.

Be aware that spritzing can make cooking take longer, and this is because opening the smoker’s cover adds moisture and lost heat.

The benefits of using a brisket spritz

For several reasons, it would help if you started using brisket spritz or spray when you grill.

Here are a few of them:

Keep it Moist and Flavor it.

The main objective of spraying is to keep the meat wet. Most moisture normally evaporates when cooking at a high temperature or for an extended period.

But when you spritz or spray brisket, the moisture is kept inside the meat, making it more juicy and flavorful. The result is typically a piece of meat with excellent bark as opposed to one that is scorched and nasty.

Furthermore, applying a brisket spritz will give the brisket a tasty-looking smoke ring rather than just a basic smoke ring.

It will be possible for the meat to absorb more smoke and improve its flavor by spraying the outside of the meat.

Wet and chilly surfaces typically absorb smoke. As an illustration, if you mist some apple juice on your brisket, the bark will be delectably caramelized, creating a delectable texture and color.

Liquids to Choose From When Spritzing Brisket

You can spray your brisket with several tried-and-true liquids while it is smoking. Don’t be scared to get inventive and try something different for your next brisket. Whatever liquid you choose, make sure it is thin enough to spray through a bottle without getting stuck.

One of the most popular liquid choices is listed below for your consideration:

Apple Cider Vinegar is one of the most frequently utilized liquids for a brisket spritz, particularly for Carolina-style barbecue. It is frequently combined with a small amount of water or apple juice to somewhat diluted apple cider vinegar. The vinegar’s acidity efficiently breaks down the spices in your rub to aid in developing the outer bark. It aids in the bark’s delightfully crunchy and black development.

And don’t worry, apple cider vinegar won’t give the finished brisket a pronounced vinegar flavor. Similar to cooking with wine, the vinegar flavor dissipates during the cooking process.

An additional well-liked spritz alternative is apple juice. The juice’s sugar contributes to the outer bark’s wonderful caramelization and subtle sweetness. Any liquid with a lot of fructose will caramelize, adding a lovely layer of crunchy, brown bark. Add a little water to the juice before putting it in your spritzing bottle if you wish to lessen its sweetness.

Both were drinking beer while cooking and spritzing it over their meat to provide moisture and great uses. Due to the beer’s low sugar content, the outside of the meat caramelizes similarly to how apple juice does. Additionally, beer gives the crust a deliciously hoppy flavor and makes it stick to the brisket very effectively. As brisket spritzers, stouts, or dark ales are excellent choices. The flavor works nicely with the meat and common seasonings.

If you are concerned that your brisket will get overly sweet or salty, spritzing it with broth is a safe choice. Many other liquid spritz alternatives are rich in acidity, sugar, or salt. Although it’s not a concern, it changes how the meat tastes. Therefore, the broth is a more flavor-neutral choice for a spritz.

Due to the low fructose content of broth, you won’t experience the same sticky sweetness that you would with apple juice or beer. The crust does tend to caramelize slightly better with the greater sugar content spritz combinations, but the changes in the bark are slight.

Butter is a fantastic substitute for oil for making a brisket spritz. It is frequently applied as a mop sauce, but it can also be melted down and diluted to be sprayed. When the butter is liquid, stir in water to thin it out to a consistency that is easy to put in a spray bottle. Keep the liquid butter warm to prevent it from solidifying and clogging the sprayer.

Although it won’t impart a distinct flavor to the meat, using butter as a spritz is an excellent way to add moisture outside. Use low-salt butter to regulate the salt in your brisket and prevent it from being overly salty.

Another great liquid for a brisket spritz is Worcestershire Sauce, provided your rub doesn’t contain a lot of salt. It will add a robust but delectable additional flavor layer to the brisket. Add water to the sauce to dilute it if the flavor is too strong.

Only spritz the meat once per 90 minutes throughout the smoke because it has a more robust flavor than the others we’ve discussed (compared to 45 with other liquids).

Sometimes it’s best to do things the easy way. Just use ordinary water to add more moisture to your brisket without changing the flavor. It will do the job and free you up to concentrate on injecting the meat with your preferred flavor using a brisket injection and external rub.

It is not required to cook the brisket with a spritz. It would be good to experiment with new methods with your smoker. Just keep in mind that spritzing your brisket usually takes more time and care on your part.

However, once you try it, the flavors it will produce are genuinely incredible and irresistible. Try it with a spray bottle.

And if you find this article helpful or have any suggestions, feel free to reach us!